I have been enjoying following some debates about the problem of consciousness on twitter and in blog posts.  In particular, philosopher Philip Goff has been tirelessly advocating the merits of panpsychism.1   As usual, this meets with a mixture of principled objections and more ungenerous responses.  I thought I would revive my blog to make a few comments, beginning with some reflections about my past thinking.  As a caveat, while I earned a PhD in philosophy recently (it's never too late!), it is not on this topic.2  My remarks are informal and tentative, and I invite corrections and reading suggestions.

My Long History with Panpsychism

I have always enjoyed puzzling over the mind-body problem.  It is one of the things that got me interested in philosophy early on.  In the 1990’s in particular, the explosion in attention the subject received (recast as the problem of phenomenal consciousness/the explanatory gap/the “hard” problem) had me riveted. 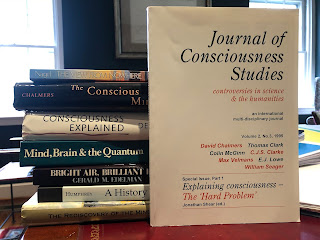 When I started my philosophy-oriented blog in 2004, it was one of my main topics, and I was a fan of panpsychist approaches. I reasoned that we know our own conscious experience exists (as well as or better than we know anything), and it doesn’t appear to be the kind of thing that can be scientifically explained using wholly non-experiential ingredients. I embraced the idea that in order to explain the character of our first-person conscious experience we must go beyond the relevant science to philosophically re-assess our assumptions about the fabric of the world.

While panpsychism is the common name for the idea that consciousness is a ubiquitous part of nature, on my blog I originally preferred to use “panexperientialism”.3  So how does panexperientialism differ from panpsychism?  The difference might seem to be just marketing.  “Panpsychism” implies that some inanimate things have minds, and that is a big affront to our usual intuitions: conscious minds seem to be something that only humans and some animals possess. Perhaps we can more easily picture “experience” as a phenomenon that might extend in attenuated fashion into the less complex building blocks of nature. A defender of panpsychism would reply by noting that the notion of experience certainly seems to require a subject of experience. And positing the ubiquity of experiencing subjects brings us right back to panpsychism.

But it seemed to me that there could be a principled difference lurking here.  While, despite some efforts at reading Whitehead, I was not well-versed in process philosophy myself, I took to heart the importance of resisting a static view of nature.  “Mind” and “subject” have static, object or substance-like connotations, while “experience” conveys the notion that consciousness is an ongoing activity. Panpsychists face a big hurdle (the much discussed “combination problem”) in explaining how small parts of nature that possess minds (particles, neurons) could combine to form a larger mind like ours. But if we view the natural world as a dynamic evolving web of processes, perhaps we can make sense of how a subject of experience could come about by degrees. The question, of course, is whether this suggestion can be fleshed out. In particular, it seems to put an emphasis on the need to understand the relationship of experience to causation (and causal forms of constitution) in the natural world.

Sometime in the mid-2000’s I went back and took a more careful look at some of Bertrand Russell’s later philosophical work on the problem, which was receiving more and more attention in the contemporary debates.  (This was in contrast to the relative lack of attention given to his old collaborator Whitehead’s process metaphysics, which most find very difficult to penetrate and assess). 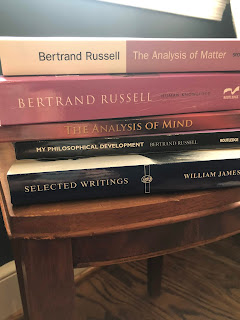 Russell set out to show how careful attention to the way physical theories are constructed can reveal a very general common framework connecting what we think of as the physical and mental realms.4  First, he argues that the subject matter of physics can be interpreted as the abstract description of events and their linkage in causal relations. He then argues that the mental realm can likewise be described in terms of events, and that, given a causal theory of perception, we can view perceptual events (“percepts”) as connecting with physical events. And a key point is that our knowledge of the physical events (which is inferred and ultimately derived from observation) includes nothing which is known to be inconsistent with the mental. Russell speaks of events (or groups of events) as having “intrinsic qualities” or “intrinsic character”. Qualitative character is known to be an aspect of percepts, but is not part of physics, given its abstract structure. Russell doesn’t assert that events described by physics must have qualities like those of percepts – he is agnostic -- but he argues there’s no reason they couldn’t.5

In contemporary debates, these ideas are typically recast in the following way (although I think a bit is lost in this translation). The idea is that physical models seek to represent the relational, extrinsic, or dispositional properties of natural systems, but leave untouched the non-relational, intrinsic or categorical/qualitative properties. This latter sort of property is a fundamental aspect of nature that provides a suitable building block for underpinning consciousness in a way that can’t be done with the resources of a traditional physicalist metaphysics.

In his recent book defending panpsychism (Consciousness and Fundamental Reality6), Goff takes the Russellian framework to be a more promising alternative to physicalism, then describes how it can be further fleshed out in a number of different ways on the way to offering his preferred solution. These ways include panpsychist theories (the building blocks of nature are conscious subjects), and panprotopsychist theories (the intrinsic properties of the building blocks do not directly involve consciousness but somehow help give rise to consciousness).

Another view Goff discusses (but does not endorse) is panqualityism: this is the view closest to that of Russell himself.  This approach begins by noting that phenomenal consciousness actually has two distinctive problem-causing aspects: its qualitative character and its subjective character.  As Russell stressed, physical models, being formal and abstract depictions of a causal “skeleton”, do not capture the intrinsic qualities inherent in natural systems.  But we are acquainted with this aspect of nature via consciousness, so we conclude it is ubiquitous. As for the fact that consciousness is something subjective (that is, it is not public or third-person, but rather private or first-person), Russell posits that subjects are constructions from causally linked networks of elementary events (in the same way our familiar macro-objects are constructed).  He does not offer a satisfying fleshed-out account of this idea (and in fact gives no theory of causation – a concept he had once famously derided7 ), but a deflationary or reductionist approach to the subject is clearly intended. Again, we are pointed to thinking more about the nature of causation and its role in complex natural systems when thinking about the problem of consciousness.

Panpsychism is Half Right

Right now, my thinking about the mind-body problem continues to be very much in line with Russell’s.  My study of philosophy of science, especially on the nature and use of scientific models, has tended only to reinforce my view that there is something right about the central Russellian insight: a view of nature derived solely from the content of physical theories will fall short of accommodating consciousness because it doesn’t encompass qualities.

On the other hand, I suspect that some of the recalcitrant intuitions we have about the nature of conscious subjects (e.g. as irreducible things) can be defeased.  Questions about which natural systems are subjects and how this works can succumb to scientific inquiry, assisted by an understanding of how successful causal explanations (including constitutive causal explanations) work in the natural sciences.  I’ll look to follow up on this topic in a future post.

1. See @Philip_Goff on twitter and the links on his website. Goff has a new book for a popular audience, called Galileo’s Error: Foundations for a New Science of Consciousness. By coincidence the copy I ordered arrived as I was writing this post. I shall read it shortly.
2. My research is in philosophy of science, with a focus on causation and scientific explanation.
3. The term is due to the Whiteheadian process philosopher David Ray Griffin.
4.  The main source here is The Analysis of Matter (1927), Nottingham: Spokesman. See the SEP article on Russellian Monism here.
5. I wrote in a bit more detail on Russell in the draft paper attached to this prior post.
6. Consciousness and Fundamental Reality (2017). Oxford: Oxford University Press. See Chapter six.  Contemporary philosophers mentioned by Goff who pursue a panqualityist approach are Sam Coleman and Tom McClelland.
7. In “On the Notion of Cause” (1912-13/1918). In B. Russell, Mysticism and Logic (pp. 142-165). London: Longmans, Green & Co.

There are many religious research paper services and Religion Assignment Writing Services to choose from for those stuck with their religion & theology essay services and theology & religion writing services.