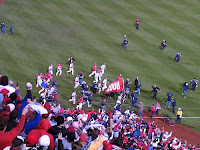 What Lies Beyond the Big Bounce

We don’t have a fully developed theory of quantum gravity yet, but there is one consequence of the theory we already know: it will banish general relativity’s space-time singularities from our conception of the universe. In particular, the idea of the big bang needs to be retired after decades of dominating professional and popular views of cosmology: the observed universe did not begin as a singularity but rather grew out of a pre-existing reality – a “big bounce”.

Martin Bojowald had a nice article in SciAm recently ("Follow the Bouncing Universe" in the print edition). Bojowald is a loop quantum gravity theorist: while loop theory has not produced an adequate theory for quantum gravity (and I think it probably won’t), it has produced formalisms that may be useful for constructing models which offer insight into the question of what will replace singularities in QG. This work goes under the rubric “loop quantum cosmology (LQC)”. I also noticed that Bojowald’s senior colleague Abhay Ashtekar has a paper out summarizing the results of work in LQC.

What intrigues me is their exploration of what the region on the other side of the big bounce might be like.

In his article, Bojowald first outlines the idea that space-time in QG is not a continuum, but rather has a fine-scale fundamental structure. These space-time “atoms” follow the rules of quantum mechanics and therefore the physics that prevails at high energies/short distances will differ from general relativity (GR). Specifically, in the loop model, a repulsive force comes into play at high energy densities, preventing singularities. In the case of the big bang, one scenario is that the initial high density state arose when a pre-existing universe collapsed (hence – a “bounce”). Bojowald describes an early, simplified, model which seemed to imply that the pre-existing universe was similar to our own. However, Bojowald says his own subsequent work found that quantum effects would have dominated the immediately pre-existing world:


“So the bounce was not a brief push by a repulsive force, like the collision of billiard balls. Instead, it may have represented the emergence of our universe from an almost unfathomable quantum state – a world in highly fluctuating turmoil.”

Bojowald finishes by discussing how we might learn more about the pre-existing universe from astronomical clues.

Ashtekar’s paper discusses the same research more formally; in addition he also deals with LGC models for black holes, where again singularities are replaced by quantum regions (somewhat surprisingly to me, black holes are somewhat more difficult to model than the big bang itself). He concludes his discussion of the big bang/bounce this way: “Big bang is not the Beginning nor the big crunch the End. Quantum space-time appears to be vastly larger than what general relativity had us believe!”

My takeaway is that a realm of quantum possibilia extends beyond and surrounds us our island of observable cosmos. The old idea of the universe as a relatively straightforward, neatly bounded space-time container must be discarded.

The Intentionality of the Single Cell

I highly recommend this paper by Tecumseh Fitch. In it he traces the distinctive intrinsic intentionality of the mind to the capabilities of the eukaryotic cell -- which he calls "Nano-Intentionality". Hat tip to this post at Conscious Entities (although Peter was less impressed than I was with the core argument).