An article entitled “Cephalopod consciousness: Behavioral evidence” by Jennifer A. Mather has appeared in the latest issue of the journal Consciousness and Cognition. In it, she looks at a variety of studies to assess the evidence that cephalopods have a form of primary (as opposed to higher-order) consciousness. This is intended as a follow-up on the previous paper on animal consciousness by Seth, Baars and Edelman published in the journal in 2005 (looking at indications of consciousness from the perspective of Bernard Baars’ “global workspace theory”). I had briefly blogged about this article and others on animal consciousness in old posts here and here. 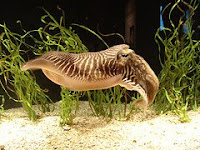 Cephalopods are particularly interesting. First, they’re just cool. More importantly, the convergent evolution of the mind in a lineage so distant from the human tells us something important, I think, about how the building blocks of consciousness are embedded deeply in the fabric of the natural world.

Setting aside higher-order reflective self-consciousness and language-possession, humans likely share with some animals a primary or core consciousness tied to their active engagement with the world. With vertebrates, the symmetries in neurological structure are one aid to assessing the potential for such a shared trait. With cephalopods this is more difficult, but certain brain anatomy-behavior linkages can be explored, and beyond that the full range of behaviors can be surveyed for clues. Mather conducts a meta-analysis of a long list of cephalopod studies to search for this evidence. She finds several areas which offer good support for the existence of primary consciousness in these animals.

With regard to brain anatomy-behavior linkages, she finds similarities in lateralization of functions (which may be linked to consciousness): this is demonstrated in the eye use of octopi in particular but another example is found in the skin displays of squid.

Sleep pattern is another clue to consciousness in animals, and there are similarities found between cephalopods and mammals here.

The developmental aspect of mind is explored: cuttlefish develop improved memory as their brains develop with some parallel to the development of young mammals and human infants.

Learning is another general area explored in many studies and Mather looks at these in some depth. Parallels to “higher” vertebrates are found. Another section explores the sense of self and self-monitoring. Also of interest is that octopi have demonstrated personality differences, and squid have shown intriguing signs of primitive language capability in their skin displays.

All this would suggest cephalopods are good candidates for animals which possess primary consciousness.

UPDATE: I see there was good blog commentary on an earlier online version of this work here and here.

Hey Steve.
I agree that Cephalods are cool critters. The camouflage display on the bottom video on this
web page never ceases to amaze me.

Also, below that is a good explanation of how the colour changes occur. I've not yet read the article you link to, but their mimicry ability supports they do indeed have a remarkable nervous system.

I just watched that video. That is great, thanks.

Whereas octopi are mostly solitary, squid can be pretty social, so the finely grained color control is used in communication. Mather herself has been studying these skin displays. I sense that she stops short of wanting to call what's going on here "language" (as a previous researcher suggested), since it doesn't seem symbolic, but it shows sophistication and nuance which goes beyond hard-wired responses.